What are Amazon SQS and Lambda?

In brief, Amazon SQS is a lightweight, fully managed message queueing service, that enables decoupling and scaling microservices, distributed systems and serverless applications. With SQS, it is easy to send, store, and receive messages between software components, without losing messages.

AWS Lambda is a fully managed, automatically scaling service that lets you run code in multiple different languages in a serverless manner, without having to provision any servers. You can configure a Lambda function to execute on response to various events or orchestrate the invocations. Your code runs in parallel and processes each invocation individually, scaling with the size of the workload.

When you configure an SQS queue as an event source for your Lambda, Lambda functions are automatically triggered when messages arrive to the SQS queue. The Lambda service automatically scales up and down based on the number of inflight messages in the queue. The polling, reading and removing of messages from the queue will be thus automatically handled by the built-in functionality. Successfully processed messages will be removed and the failed ones will be returned to the queue or forwarded to the DLQ, without needing to explicitly configure these steps inside your Lambda function code.

Problems with valid messages ending up in DLQ

In the recent project we needed to process data that would be coming in daily as well as in larger batches with historical data loadings through the same data processing pipeline. In order to handle changing data loads, SQS decouples the source system from processing and balances the load for both use cases. We used SQS for queueing metadata of new data files and Lambda function for processing the messages and passing on metadata to next steps in the pipeline. When testing our solution with pushing thousands of messages rapidly to the queue, we observed many of the messages ending up in a dead-letter queue, even though they were not erroneous.

From the CloudWatch metrics, we found no execution errors during the given period, but instead there was a peak in the Lambda throttling metric. We had configured a DLQ to catch erroneous messages, but ended up having completely valid and unprocessed messages in the DLQ. How does this happen? To understand this, let’s dive deeper into how Lambda functions are triggered and scaled when they have SQS configured as the event source.

Let’s first introduce briefly the parameters of SQS and Lambda that are relevant to this problem.

ReceiveMessageWaitTimeSeconds: Time that the poller waits for new messages before returning a response. Your messages might be arriving to the SQS queue unevenly, sometimes in bursts and sometimes there might be no messages arriving at all. The default value is 0, which equals constant polling of messages. If the queue is empty and your solution allows some lag time, it might be beneficial not to poll the queue all the time and return empty responses. Instead of polling for messages constantly, you can specify a wait time between 1 and 20 seconds.

VisibilityTimeout: The length of time during which a message will be invisible to consumers after the message is read from the queue. When a poller reads a message from the SQS queue, that message still stays in the queue but becomes invisible for the period of VisibilityTimeout. During this time the read message will be unavailable for any other poller trying to read the same message and gives the initial component time to process and delete the message from the queue.

maxReceiveCount: Defines the number of times a message can be delivered back to being visible in the source queue before moving it to the DLQ. If the processing of the message is successful, the consumer will delete it from the queue. When ever an error occurs in processing of a message and it cannot be deleted from the queue, the message will become visible again in the queue with an increased ReceiveCount. When the ReceiveCount for a message exceeds the maxReceiveCount for a queue, message is moved to a dead-letter queue.

BatchSize: The maximum number of messages that Lambda retrieves from the SQS queue in a single batch. Batchsize is related to the Lambda event source mapping, which defines what triggers the Lambda functions. In this case they are triggered from SQS.

In the Figure 1 below, it is illustrated how Lambda actually scales when messages arrive in bursts to the SQS queue. Lambda uses long polling to poll messages in the queue, which means that it does not poll the queue all the time but instead on an interval between 1 to 20 seconds, depending on what you have configured to be your queue’s ReceiveMessageWaitTimeSeconds. Lambda service’s internal poller reads messages as batches from the queue and invokes the Lambda function synchronously with an event that contains a batch of messages. The number of messages in a batch is defined by the BatchSize that is configured in the Lambda event source mapping. 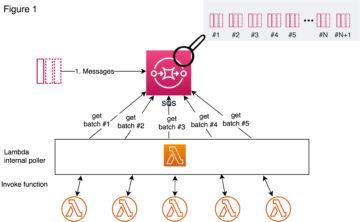 When messages start arriving to the queue, Lambda reads first up to 5 batches and invokes a function for each. If there are messages still available, the number of processes reading the batches are increased by up to 60 more instances per minute (Figure 2), until it reaches the 1) reserved concurrency limit configured for the Lambda function in question or 2) the account’s limit of total concurrent Lambda executions (by default 1,000), whichever is lower (N  in the figure). 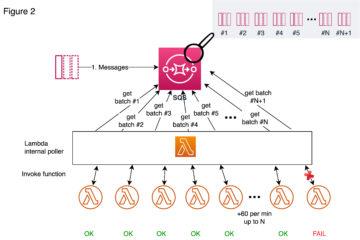 By setting up a reserved concurrency limit for your Lambda, you guarantee that it will get part of the account’s Lambda resources at any time, but at the same time you also limit your function from scaling over that limit, even though there would be Lambda resources available for your account to use. When that limit is reached and there are still messages available in the queue, one might assume that those messages will stay visible in the queue, waiting until there’s free Lambda capacity available to handle those messages. Instead, the internal poller still tries to invoke new Lambda functions for all the new messages and therefore causes throttling of the Lambda invokes (figure 2). Why are some messages ending up in DLQ then?

Let’s look at how the workflow goes for an individual message batch if it succeeds or fails (figure 3). First, the Lambda internal poller reads a message batch from the queue and those messages stay in the queue but become invisible for the length of the configured VisibilityTimeout. Then it invokes a function synchronously, meaning that it will wait for a response that indicates a successful processing or an error, that can be caused by e.g. function code error, function timeout or throttling. In the case of a successful processing, the message batch is deleted from the queue. In the case of failure, however, the message becomes visible again. 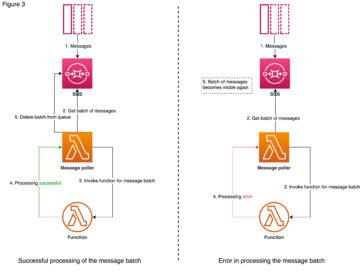 The SQS queue is not aware of what happens beyond the event source mapping, if the invocations are failed or throttled. It keeps the messages in the queue invisible, until they get either deleted or turned back to visible after the length of VisibilityTimeout has passed. Effectually this means that throttled messages are treated as any other failed messages, so their ReceiveCount is increased every time they are made visible in the queue. If there is a huge burst of messages coming in, some of the messages might get throttled, retried, throttled again, and retried again, until they reach the limit of maxReceiveCount and then moved to the DLQ.

The automatic scaling and concurrency achieved with SQS and Lambda sounds promising, but unfortunately like all AWS services, this combination has its limits as well. Throttling of valid messages can be avoided with the following considerations:

Set the maxReceiveCount big enough in your SQS queue’s properties, so that the throttled messages will eventually get processed after the burst of messages. AWS suggest you set it to 5 or greater.

By increasing message VisibilityTimeout of the source queue, you can give more time for your Lambda to retry the messages in the case of message bursts. AWS suggests this to be set to at least 6 times the timeout you configure to your Lambda function.

Of course, tuning these parameters is an act of balancing with what best suits the purpose of your application.

Configuring DLQ to your SQS and Lambda combination

If you don’t configure a DLQ, you will lose all the erroneous (or valid and throttled) messages. If you are familiar with the topic this seems obvious, but it’s worth stating since it is quite important. What is confusing now in this combo, is that you can configure a dead-letter queue to both SQS and Lambda. The AWS documentation states:

To understand this one needs to dive into the difference between synchronous and asynchronous invocation of Lambda functions. 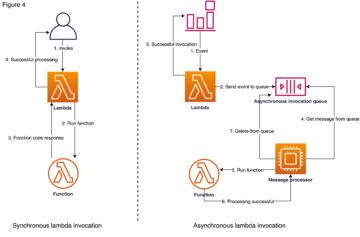 Recently, AWS launched Lambda Destinations, that makes it possible to route asynchronous function results to a destination resource that can be either SQS, SNS, another Lambda function or EventBridge. With DLQs you can handle asynchronous failure situations and catch the failing events, but with Destinations you can actually get more detailed information on function execution in both success and failure, such as code exception stack traces. Although, Destinations and DLQs can be used together and at the same time, AWS suggests Destinations should be considered a more preferred solution.

The described problems are all stated and deductible from the AWS documentation, but still not completely obvious. With carefully tuning the parameters of our SQS queue, mainly by increasing the maxReceiveCount and VisibilityTimeOut, we were able to overcome the problems with Lambda functions throttling. With configuring the DLQ to the source SQS queue instead of configuring it to Lambda, we were able to catch erroneous or throttled messages. Although adding a DLQ to your source SQS does not solve anything by itself, but you also need to handle the failing messages in some way. We configured a Lambda function also to the DLQ to write the erroneous messages to DynamoDB. This way we have a log of the unhandled messages in DynamoDB and the messages can be resubmitted or investigated further from there.

Of course, there are always several kinds of architectural options to solve these kind of problems in AWS environment. Amazon Kinesis, for example, is a real-time stream processing service, but designed to ingest large volumes of continuous streaming data. Our data, however, comes in uneven bursts, and SQS acts better for that scenario as a message broker and decoupling mechanism. One just needs to be careful with setting up the parameters correctly, as well as be sure that the actions intended for the Lambda function will execute within Lambda limits (including 15 minutes timeout and 3,008 MB maximum memory allocation). The built-in logic with Lambda and SQS enabled the minimal infrastructure to manage and monitor as well as high concurrency capabilities within the given limits.