In the first part of this blog series, we discovered how many followers four Finnish esports channels share on Twitch. We also learned about Twitch as a platform and esports as a growing industry. If you haven’t read it, I recommend you to at least check the quick summary at the end of it, before reading this one.

Finnish esports channels that were studied in this series. Follower data fetched 2.8.2021.

At the time of the last post (data fetched 22.6.2021), four Finnish esports channels (ElisaViihdeSport, Pelaajatcom, TES_csgo, and yleeurheilu) had a total of 117049 unique followers. In this post, we are using a little bit more updated dataset, as data was fetched 2.8.2021. Just like last time, I’ll refer to channels as following: ElisaViihdeSport as Elisa, Pelaajatcom as Pelaajat, TES_csgo as Telia, and yleeurheilu as YLE.

Numbers didn’t change much during the summer as there were little to no broadcasts for any studied channels. This time we’re studying 117285 Twitch users, meaning that the dataset is practically the same.

The average user among this group still follows only 1.62 of the four studied channels. As mentioned in the previous blog post, Finnish esports broadcasters compete more with international broadcasts instead of their Finnish competitors. Therefore, it would benefit them if they managed to share their followers, boosting everyone’s numbers.

Using Twitch API, we can find out which are the most popular Twitch channels among our esports follower group of 117000 Twitch users. With that knowledge, we can draw a bigger picture of interests they might have. Of course, a follow doesn’t necessarily mean that they are intensely watching that channel, but at least they want to know if the channel is live.

For our broadcasters, it’s important to know their audience and recognize potential channels for marketing campaigns and other types of co-operations. Influencer marketing can be an effective tool to gain new followers and data helps to find the most suitable influencers.

As we already knew, followers of these accounts are – obviously, duh – interested in esports content, especially around CS:GO. The most popular channels feature international CS:GO tournament organizers such as ESL (ESL_CSGO and ESL_CSGOb), DreamHack (DreamHackCS), and BLAST (BLASTPremier). At the same time, there are a lot of active esports professionals, for example Aleksi “Aleksib” Virolainen (Aleeksi), Elias “Jamppi” Olkkonen (superjamppi) and Oleksandr “s1mple” Kostyliev (s1mple).

While it might be difficult to get these esports superstars to promote other Twitch channels than their own, the list contains many Finnish influencers, who could help to reach new audiences. There are already good examples, as Anssi “AndyPyro” Huovinen (OfficialAndyPyro) was part of Pelaajat.com bingo broadcast and Joonas-Peter “Lärvinen” Järvinen (Larvinen12) played Telia’s “aim challenge map” on his stream.

And why do these matter? Because as we take a closer look at channels that Pelaajat followers are following, we’ll see that AndyPyro’s channel is the third most popular channel with more than 30000 shared followers. Staggering 45 % of Pelaajat followers follow his channel too.

There are only two channels with more “related followers”. Both of them are their competitors, as ESL_CSGO is the main channel of tournament organizer ESL and ElisaViihdeSport is, as you already know, a Finnish competitor. The content of AndyPyro resonates with followers of Pelaajat, meaning that his follower base contains potential followers for them.

Telia’s co-operation with Mr. Lärvinen isn’t just about numbers, as he has been a part of their other esports broadcasts as a commentator. But the numbers should be a major factor as well. He is one of the most followed influencers among Telia followers, which we can see from this top 15 list:

If we dug deeper within the realms of Twitch API, we could make some kind of estimations of how many follows were influenced by these co-operations. Unfortunately, that’s something we have to leave out of this scope. The data is available for free, so broadcasting companies should take a look to find potential channels for campaigns like these and check how well they worked.

Has there been “following influence” from one esports channel to another?

Before we can check who followed who first, we should take a look at how many followers these channels share. As we learned from the previous post, “dedicated followers” are the biggest chunk with more than 70000 followers, but luckily for us, there are still more than 40000 Twitch users following 2-4 Finnish esports channels we’re studying here.

It was important to have no more than four channels to study because now we can check all the possible combinations – six pairs, four trios, and one quartet – of shared followers.

Important reminder: Twitch API numbers aren’t the absolute truth, as a follow gets wiped out of history books when user unfollows the channel. For example: If someone has found and followed a channel three years ago, unfollowed later and followed again two weeks ago, only the latter follow is in the books.

All the possible pairs of channels and their shared followers

Elisa and Pelaajat created their channels one year earlier and have way more followers than Telia and YLE, so it was expected that their followers would have followed other channels more than the other way around. The following orders between their shared followers were pretty close, as the split went 51-49 in favor of Elisa.

All the possible trios of channels and their shared followers 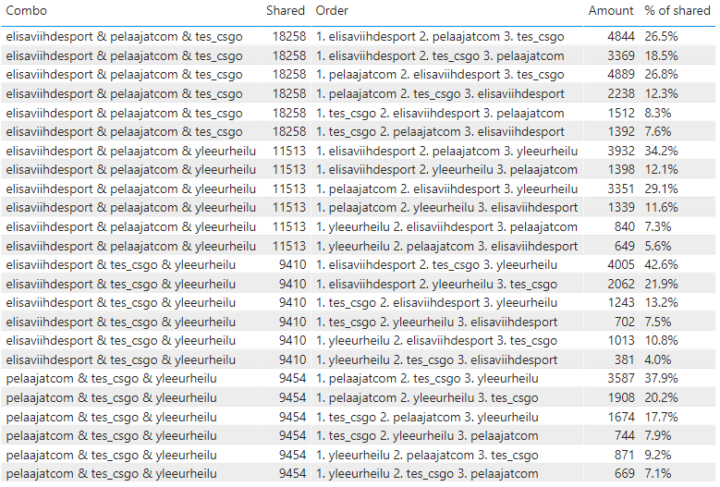 No surprises there either, as Elisa and Pelaajat have been the most common “gateways” to follow other channels. Finally, all 24 combinations of how 8907 users have ended up following all four channels:

There are 24 different possibilities of how a user might have followed all four channels. If we check how 8907 four-channel-followers have ended in their positions, 46 % of them have had Elisa and Pelaajat as their first and second channels. Only 22 % had neither Elisa nor Pelaajat as the first channel they followed out of these four.

Twitch has established some kinds of channel recommendations for its new users during the account creation phase as some users have followed two or more of these channels at the same second. For existing users, Twitch has algorithms to recommend new channels at all times. These recommendations can be seen automatically and they can be browsed manually too.

Whether it happens through these algorithms or by other social media channels, Twitch broadcasters can and will find new followers from other channels with similar content. Even if Elisa and Pelaajat have gained significantly fewer followers from Telia and YLE than the other way around, it’s still important to “convert” all the potential followers they can. Compared to international numbers, the Finnish esports audience is relatively small, and as we’ll see in the next chapter, one-dimensional.

Follower numbers have been great for all these channels, especially Elisa and Pelaajat. However, it’s important to remember that those numbers were reached with free-to-watch content. Pelaajat has hundreds of monthly subscribers on Twitch, but it’s a completely optional supporting fee. They need advertisement revenue too.

There’s a long way to go to make esports broadcasts sustainable, let alone profitable. YLE is the only one without any financial pressure to grow, as it’s funded by the government. Of course, usage of taxpayers’ money needs to be justified now and then, so healthy follower numbers are useful for them too.

As it was shown, all these channels can grow whether or not they can attract completely new viewers to watch their esports content. Co-operation with different influencers is one way to gain more followers, but finding the right content is the most important one. One thing is certain, you can’t just buy these followers to yourself, you’ll need some luck too.

That luck could be described as “having broadcasting rights for a tournament with a CS:GO team that draws interest from Finnish followers”.

All four channels have gained most of their “new follower spikes” by broadcasting CS:GO tournaments. It’s no coincidence that the biggest gains have happened during CS:GO matches featuring Finnish teams of Finnish esports organizations ENCE and HAVU Gaming. Starting from the beginning of 2019, all broadcasters have benefited a lot from successful periods of Finnish Counter-Strike teams.

Finnish esports channels have grown their numbers during the last few years, and hopefully, they keep on growing. As broadcasts are free and rarely done simultaneously, it’s possible to get followers from competitors without hurting their business. It would be a whole new ball game if broadcasters had to constantly fight for the same concurrent viewers. It’s bound to happen sometimes with some open qualifiers, but it’s not that common because of exclusive broadcasting rights.

Different channels have different styles and it’s impossible to please everyone. Nevertheless, it’s possible to find followers from competitors, and as you saw from the previous chapters, it has already happened a lot. As their average Twitch follower follows tens of other channels, Finnish esports broadcasters compete for attention against international broadcasts and other Twitch streamers rather than each other.

If esports broadcasts weren’t free to watch, would their Twitch followers watch other, more casual Twitch streamers instead of “buying the ticket” for esports tournaments? Even if someone follows a channel, how likely is it that they watch it regularly, instead of all the other 40+ different channels on their list? Even if they watch, are they really watching and paying attention to advertised products?

Getting lots of followers is only the beginning. Hopefully, this series provided some insights on that part. Monetizing esports followers is for someone else to figure out.

Thank you for reading, I’ll gladly answer questions on Twitter or LinkedIn if anything comes to your mind!

For those of you in a hurry, I’ll try to sum up key points of this post:

Summary of the series

In this series, Finnish esports channels were used as examples of Twitch channels with similar content and follower base. While we learned about 117000 Twitch users following them, we learned about different Twitch API data use cases along the way.