Snowflake released new features which can be broken down into to following categories: Core Data Warehouse, Data Pipelines, Global Snowflake and Secure Data Sharing. I’ll list the features and give a more precise description of the feature (if possible).

Core Data Warehouse features are the bread and butter of Snowflake. Everybody is already familiar with Snowflake features such as virtual warehouses, separation of storage and compute so Snowflake didn’t release any announcements on those. They though said that they are working on decreasing concurrency latency and making large ad-hoc queries to work even better. In larger scale this means that the boundaries of operational databases and operational data platforms are narrowing down.

On the security side, Snowflake told that they are working with multiple vendors on enabling identity passing from BI -tools to Snowflake. Basically this means that your user id which you use to log on to for example to Tableau, is passed straight to Snowflake. This will enable even better row-level security and secure views possibilities. As of today, Snowflake reminded, that Snowflake already supports OAuth 2.0 as an authentication method.

Under the hood, JavaScript Stored Procedures support was reminded and the possibility of Geospatial capability was spoken (nothing released, rather teased).

Guys and gals at Snowflake are also keen on providing a richer experience for the end users. They told that they had gathered information from the end users, to provide better worksheets, Worksheet 3.0 so to speak. The end result of that was that during the investigation phase they encountered company called Numeracy and eventually decided to make their first acquisition as Numeracy was working on creating even better UI for Snowflake. Now the features of Numeracy UI are being ported into Snowflake UI. Numecary UI provides better editor suggestions, visualizations and provides worksheet sharing. On text this doesn’t sound anything new, but my colleague took a video of the new UI and it is awesome.

Data Pipelines is a new feature coming into Snowflake. Basically Snowflake has now the capability to auto-ingest data coming into the cloud storage layer and the possibility to do a data transformation for the data based on user-defined tasks. This means that you no longer need any external scheduler to trigger the small ELT or scheduled jobs.

This is possible due to the following new features:
– Auto-Ingest
– Streams and Tasks

During the Data Pipelines presentation a Snowflake Connector for the Kafka was also announced.

As a surprise effect, all the features which were were listed above are available today in public preview.

The most anticipated release was the release of Google Cloud version of Snowflake, which will be on preview at Q3 at 2019. Google Cloud supported stages are though possible already, as noted earlier.

Database replication is a point-and-click version of the traditional Oracle Data Guard or Microsoft SQL Server AlwaysOn Cluster where you define database which you want to replicate to a different location for business continuity purposes or just to provide read-only data nearer to the end users. The difference to the Oracle and Microsoft versions is that Snowflake implementation works out-of-the-box without any hassle. Database replication also supports failover and failback for client application end user point, meaning that if you have Tableau Server connected to Snowflake and you do a failover the database, Tableau Server will reconnect to the new location. 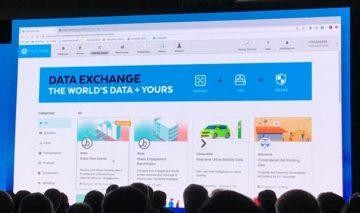 There are two options for this, Standard and Personalized. Standard -data is your normal data set, available for everybody. Personalized -data requires authentication between you and the data provider, but it will grant you the possibility to ingest your own data (if possible) straight from the provider using Data Sharing -functionality.
If that’s not all, Snowflake even advertised in mid-sentence, a simpler way to deploy Tableau into AWS and configure it to use Snowflake, now in 30 minutes.

Hopefully, this list helps you to get a grasp on things to come on Snowflake landscape. I will update this list if new features will be launched tomorrow or Thursday.